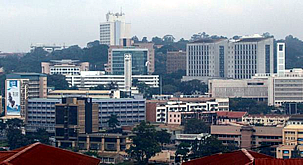 in Blog
by imchu
0 Comments

There are significant opportunities for Irish companies in Uganda, the country’s minister for trade Amelia Kyambadde has said on a visit to Ireland.

Trade between the two countries currently stands at about €24 million per annum. Ms Kyambadde told The Irish Times there is considerable scope for this to increase in the coming years.

“We’re looking for companies to partner with us in order to create jobs for our people and boost the economy,” Ms Kyambadde added.

The minister l led an official delegation to Ireland last week that included representatives from more than 40 Ugandan companies. In addition to attending the National Ploughing Championships in Co Carlow, and taking part in an investment forum organised by the Department of Foreign Affairs and Trade, members of the delegation also met with a number of ministers and trade organisations.

While in Dublin, Ms Kyambadde also signed a memorandum of understanding between the Ugandan and Irish governments to promote greater cooperation between the two nations.

This year marks the 25th anniversary of the opening of the Irish embassy in Kampala.

Speaking at an event organised by the Department of Foreign Affairs and Trade, Ms Kyambadde highlighted business opportunities in a number of sectors, including agriculture, IT, manufacturing and tourism.

She said while some Irish companies are already investing in Uganda, the trade relationship is not fully developed and urged organisations here to consider partnering with Ugandan counterparts on possible joint ventures.

The African Agri-foods Development Fund, which is funded by the Department of Foreign Affairs and Trade and the Department of Agriculture, Food and the Marine, provides grants of up to €100,000 for Irish companies looking to undertake feasibility studies in Uganda. It also offers further funding for organisations committing to projects in the country.

Speaking to The Irish Times, William Carlos, the Irish ambassador in Kampala, said he was hopeful a trade mission from Ireland to Uganda would take place shortly.